Biodiversity, landscape and other environmental values associated with the Moolort Plains and adjacent districts.

The Moolort Plains are a place of significant landscape value. Prior to European settlement the area was sparsely wooded grassland, punctuated with a number of gentle volcanic cones, deeply incised valleys and chains of freshwater meadows and red gum and lignum wetlands. While agricultural development has had a major impact on the landscape, the essential character remains that observed by Major Mitchell’s party that passed nearby in 1836.

The Moolort Plains comprises two significant, but ecologically distinct natural ecosystems – wetlands and grassy woodlands/native grasslands. The association of these ecosystems, on volcanic soils north of the Great Dividing Range, is unique in Victoria and is reflected in the significant values associated with this landscape.
The Moolort wetlands, is a chain of approximately 48 swamps scattered across a large basalt plain (known as the Moolort Plains) located in the Loddon catchment of North Central Victoria.
The combined area of all the swamps in the Moolort wetlands is approximately 1034 hectares. The swamps largely occur on private land and have been described as Red-gum wetlands, freshwater meadows and/or shallow freshwater meadows (DSE 2004).

The area has been extensively cleared for agriculture with sheep grazing and cropping the major land uses. While the mean annual rainfall is approximately 524 mm, rainfall totals during the period from the mid-1990s to 2010 were substantially lower, meaning that until recently these swamps have been largely dry. Many of the swamps are already managed for conservation by local farmers, but there is also evidence that the prolonged drought has brought some of the land on/around the swamps back into production (Seymour et al. 2008). Whilst some of the swamps have been fenced to manage stock access, a number have been grazed and cropped. There are approximately 30 commercial farmers within the wetland area.

The wetlands are situated on a large area of basalt which is part of the Victoria Volcanic Plains Bioregion, a designated national biodiversity hotspot. The basalt is 30 to 50 metres thick and regional groundwater flow is generally to the north (Australian Natural Resources Atlas 2002). Discharge from this basalt aquifer occurs in topographic lows, producing the Moolort wetlands (ANRA 2002). The Groundwater Management Unit is known as ‘Moolort’ (ANRA 2002).

The Moolort Plains has been described as being ‘largely featureless’ with the exception of prior-stream levees and swamps and is quaternary olivine basalt (Schoknecht 1988). The northern part of the Moolort Plains (north of the Pyrenees Highway) features a fertile red duplex soil, ideal for cropping. The southern part of the Moolort Plains features volcanic cones (now flat hills), is poorly drained and is more suitable for grazing (Schoknecht 1988). Nine major soil types occur through the Moolort Landcare group area (Bryant & Lorimer 1993).
River Red-gum Eucalyptus camaldulensis is found within and directly surrounding many of the wetlands. Tangled Lignum Muehlenbeckia florulenta is a feature on some of the swamps. The Moolort Plains is largely a treeless plain that was once dominated by native grasslands. Silver Banksia Banksia marginata, Drooping Sheoak Allocasuarina verticillata, Tree Violet Hymenanthera dentata and Sweet Bursaria Bursaria spinosa were prominent prior to clearing – of these only Tree Violet remains to any extent today.

The wetlands have been described by local farmers as an ‘oasis’ amongst agricultural land and are considered to play a very important role in bird migration (Seymour et al, 2008). For example, Long Swamp is said to be an important wildlife corridor between Tullaroop Reservoir and Deep Creek (NCCMA, 2013). According to a survey of local residents living in and around the Moolort Plains, the swamps are valued highly for a range of environmental reasons particularly for providing bird habitat, sustaining life, threatened species habitat and playing a vital role in bird migration (Seymour et al, 2008).

The Seasonal Herbaceous Wetlands Ecological Community is naturally surrounded by native dryland vegetation communities, typically natural temperate grasslands and grassy woodlands. These are distinguished from the wetlands by the dominance of a suite of dryland grass and forb taxa, e.g. Themeda, Austrostipa, Chrysocephalum, and the absence of wetland species. These grassy dryland communities also have declined considerably and some are listed as nationally threatened ecological communities in their own right, e.g. Natural Temperate Grassland of the Victorian Volcanic Plain; Grey Box (Eucalyptus microcarpa) Grassy Woodlands and Derived Native Grasslands of South-eastern Australia; Buloke Woodlands of the Riverina and Murray-Darling Depression Bioregions, remnants of which all are known to occur on the Moolort Plains.

The Moolort wetlands have supported a rich abundance of bird life as evident in the writings of Chisholm (1969). A bird list of the Moolort Plains, compiled between the 1950s and 1960s, lists 103 different species of birds (Rogan & Courtney 1963).

In particular it should be noted that the Australian Painted Snipe is listed as endangered on the IUCN Red List. This species is known to be highly sensitive to land use intensification (Australian Government, 2014). The area is also important to the last remaining pairs of Brolga in central Victoria, with Long Swamp and Saligari’s Swamp both renowned as major flocking sites for this species.
A detailed floristic survey and fauna survey has recently been completed for Long Swamp (Cook 2009). This survey revealed the threatened Growling Grass-frog Litoria raniformis. More comprehensive flora and fauna surveys are warranted across the entire complex.

A number of rare and threatened reptile species are also found on the Moolort Plains, with recent records in the vicinity of the proposed broiler complex development (DEPI, 2013). These include the Striped Legless Lizard Delma impar (Vulnerable under EPBC Act); Olive Legless Lizard Delma inornata and the Woodland Blind Snake Ramphotyphlops proximus (near threatened in Victoria under the FFG Act).
Community/social values

The Moolort wetlands have significant indigenous heritage value. An initiation ground of the Djadja Wurrung people is located ‘in a secluded valley’ near Carisbrook. The Moolort Plains were an important food source for the local Indigenous people (the DjadjaWurrung language group).
The Dja Dja Wurrung People are the traditional owners of the Moolort Wetlands. During the aforementioned Moolort wetlands project seven landholders participated in assessments for cultural heritage, recording artefacts and significant sites. A report (NCCMA, 2013) was drafted about the cultural heritage importance of the wetlands, highlighting the incredible productivity of the region.

The area also has significant European cultural heritage value as an historic mining site, as one of the earliest European pastoral settlements in the region (previously known as Charlotte Plains) and as the setting for Raimond Gaita’s acclaimed novel ‘Romulus, My Father’ (set around Frogmore Swamp and dealing with the hardships of immigrants in the 1950s). 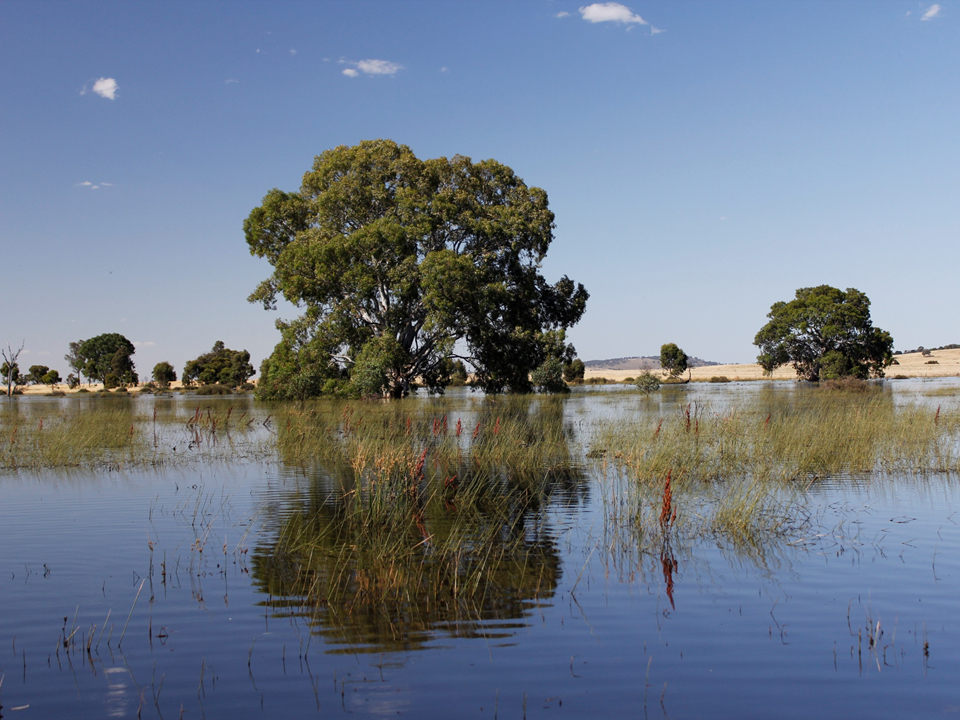 For more information and beautiful photos go to (https://geoffpark.wordpress.com/author/geoffpark/)